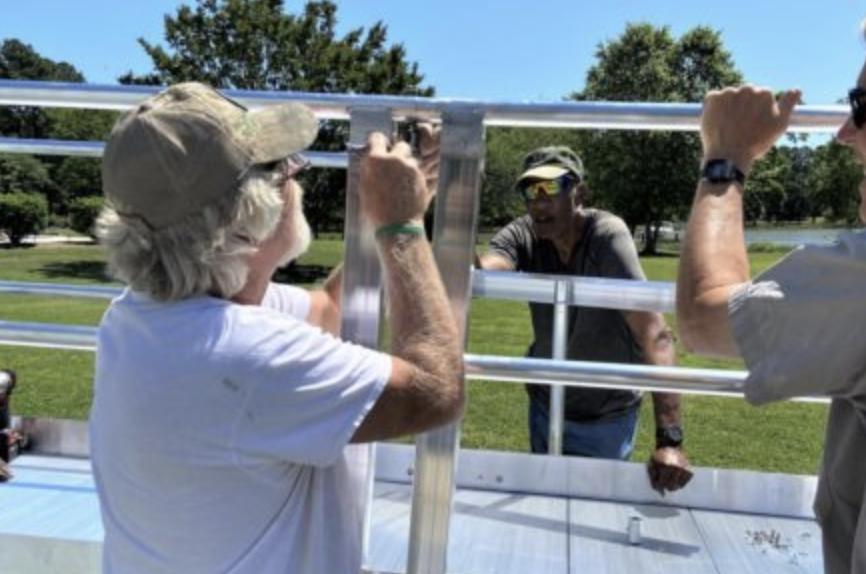 Editor Note: This is the first of three articles that focus on the recipients of the Qlarant Foundation grant awards over the last year. We began with the Bay Hundred Community Volunteers based in Talbot County. Yes, this group is unique. They’re a nonprofit community service organization with no paid staff. But their work is priceless; ask any of those they helped. They are known as the Bay Hundred Community Volunteers (BHCV), but their scope of work far exceeds the Bay Hundred area.

Started in 1999 by Bill Shrieve and his wife Jean, their mission is to help improve the living conditions of Talbot County residents and raise public awareness of the need for adequate, safe, and affordable housing. Initially, though, it was created to address a specific need for a small community in Sherwood, Maryland. At that time, the fledgling yet motivated group took out 150 tons of trash, redid the roads, cleared brush, and did some minor home repair services. To fund what needed to be done, they held chicken barbecues and solicited donations from individuals and groups

After a couple of years, the group became a nonprofit and began serving low-income Bay Hundred residents. They expanded again in 2009 to provide home repairs to all of Talbot County. Repairs which included replacing windows, installing storm doors, etc. Over time, what BHCV discovered was an ever-growing need for mobility home additions and modifications. Grab bars, handrails, and handicap ramps became another and important part of their mission. But it was the work they did building wheelchair ramps from scratch that gained them notoriety as the only nonprofit organization providing this service to Talbot County’s vulnerable residents who had income limitations. But the group also had constraints. Despite an estimated need for approximately 25 ramps, BHCV only had the resources to build 3-4 ramps per year. The process of using wood in their construction was not only labor-intensive and time-consuming, but the permit procedure was challenging. Additionally, once installed, the ramps were not reusable.

That’s when Easton-based Qlarant Foundation (the charitable arm of Qlarant) stepped in and, in 2020, awarded the group a $15,000 grant. With the money, BHCV were able to purchase and install modular aluminum ramps that were easy to assemble, ADA compliant, and, since they are temporary, usually do not require a permit. “Since we started doing them in March of 2020,” said Shrieves, “we’ve installed 44 ramps to neighbors at no charge for as long as needed. Once they no longer have a need, we recover them and use the parts for other ramps.”

Referrals usually come from the Talbot County Health Department or the Department of Social Services, and BHCV follows HUD guidelines for income limitations. “$34,200 for a single person living alone Is what we look at and the people we’re working with,” says Shrieves.

Qlarant has continued to be their primary contributor, but other grants and support from the community, private foundations, and businesses have allowed this unique program to continue and thrive. These have included Mid-Shore Foundation, Leonard and Helen R. Stulman Charitable Foundation, etc.

There are many stories about how lives have been changed by the efforts of BHCV’s installations of ramps. They range from reducing social isolation to helping people to get to their medical appointments. All important to the health of a community. Bert was a retired radiology technician and Neavitt resident, who loved dogs, photography, the outdoors, and music. in October of last year, he suffered a stroke and spent time in a rehab facility. But he wanted to be home with his dogs. BHCV fulfilled that wish by installing a ramp in May 2022. However, he had another stroke in late August and sadly passed away. BHCV disassembled the ramp.

At about the same time, the Talbot County Health Department contacted BHCV about Tina, a single parent of four who had been diagnosed with ALS (Lou Gehrig’s disease) and whose condition had quickly declined. She started using a wheelchair and moved in with a friend to get the support she needed. Using part of the materials from Bert’s ramp, and with no additional cost to BHCV, a ramp was built and installed for her in September. Tina can now leave home or just sit outside enjoying the sun. Additionally, BHCV will soon install other parts of Bert’s ramp for another client.

Besides the success they’ve experienced with their ramp program, BHCV continues to do their home repair work as well. Although volunteers do most repairs, licensed contractors are sometimes hired for the more complex projects. Said Shrieves, “We did a bathroom that was just the worst; the toilet was being held up with a 2×4. It required complete gutting and rebuilding of the floor joists and turned out to be a $13,000 project–way more than what we could afford. So Choptank Electric Trust came in with $2,500, a family raised about $4,000, and we paid for the rest. We combine these kinds of coalitions to get a big project done.”

What they have accomplished with these impromptu coalitions has been nothing short of amazing. A typical year for the group was an investment of $15-20,000 in home repairs. Shrieves estimates that this year they will have invested around $60,000 and will finish 30-35 projects. But also remarkable is how many volunteers are involved in these tasks.

“We probably have around 20 people on our roll,” said Shrieves. “About 15 do the physical volunteer work, and the rest are involved in other activities.” Surprisingly none of them have had professional careers in home building or repair. They’re just people who are ‘handy,’ mostly neighbors interested in helping their neighbors.”

Enthusiasm and pride are not lacking when speaking to anyone in the group. Still, as they continue to grow, BHCV is experiencing the same challenges as other nonprofits—the need for more volunteers. “We’re looking for people who, when I send out an email to everybody and say, ‘Hey, we got a ramp to install next Tuesday, who’s available?’ can pipe up and help. We also need folks willing to get involved in the administration and leadership of the organization. People who, in the future, would be in a position to succeed me and some of the other folks,” said Shrieves.

Until that time come, and for now, the group will continue to do what they do best, bring hope to those in need.

Val Cavalheri is a writer and photographer. She has written for various publications, including The Washington Post.  Previously she served as the editor of several magazines, including Bliss and Virginia Woman. Although her camera is never far from her reach, Val retired her photography studio when she moved from Northern Virginia to the Eastern Shore a few years ago.. She and her husband, Wayne Gaiteri, have two children and one grandchild.