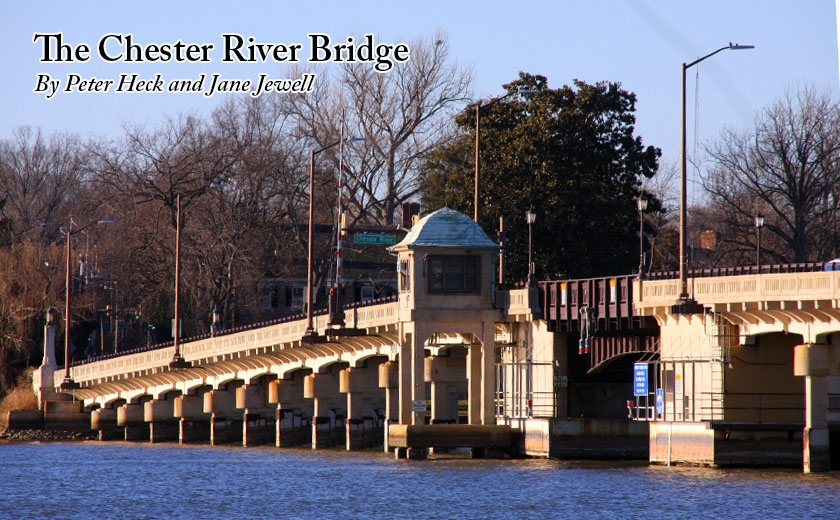 We often cross the Chester River Bridge several times a day, appreciating the view of the river as we go but not really thinking much about the bridge itself.  Yet this bridge is a lifeline, a vital link connecting Chestertown and Kent County to Queen Anne’s County and the rest of Maryland.

The bridge’s importance came into focus not so long ago when The State Highway Administration (SHA) announced that the bridge would be closed for inspection, maintenance, and painting for four to six weeks in the summer of 2016.  In the summer?  Tourist season?  Unthinkable!

The proposal met with opposition from the entire local community, which cited the disruption to businesses, access to the hospital and other facets of local life. Traffic between Queen Anne’s and Kent counties would have been required to cross either at Crumpton or Millington, a rather long detour for many who live just across the bridge from Chestertown, who can often see Chestertown from their own yards .  What was normally a quick, five-minute drive from Kingstown to the grocery store in Chestertown would suddenly be a 30-minute, 15-mile drive down to Crumpton, across the bridge there, then back up to Chestertown.  Then reverse it for another 30-minute, 15-mile drive back home.  Given that choice, Chester Harbor residents and others on the QA side of the river might decide it was easier to drive 20 minutes to Centreville for groceries. Chestertown might never regain their business.

However, those who live on one side of the Chester River but work on the other would have no alternative.  They in their cars would have to schlep through Crumpton and over that bridge every day.  Both ways.

Emergency workers worried about quick access to the hospital for residents on the other side of the bridge.  Could heart attack or accident victims get there in time?  And what about fires?  Could firetrucks get to the scene in time?  The Chester River Bridge was not just scenic; it was essential.

Eventually, a task force of residents, business owners and government officials from both counties hammered out a plan requiring closure of the bridge only at night for the necessary work and in the fall after the summer season. The agreement left the bridge open for the town’s Harry Potter festival and Downrigging weekend, both of which bring significant numbers of tourists – and revenue! – to town.

The maintenance work and painting was completed in the fall of 2016, and the SHA gave the bridge a clean bill of health, stating that the paint was expected to last another 20 to 25 years. And in fact, the older bridge it replaced had lasted more than a century.  (Bayly La Palme, in a presentation at the Historical Society of Kent County in November last year, gave a fascinating overview of the Chester River crossings – of which the current bridge is the third. Copies of her article “The Old Chester River Bridge” are available from the Historical Society.)

But that completion of the maintenance just over a year ago didn’t end the controversies about the span. As long ago as the 1960s, residents proposed the need for a second bridge to take heavy truck traffic around rather than through Chestertown.  A second bridge would also serve as a backup, an alternate route whenever there might be problems or closures of the other bridge. With an estimated 17,000 vehicles crossing the bridge daily, the congestion on local streets can be considerable, especially on Rt 213 – Maple and Washington Avenues.  The SHA now prefers the word “boulevard” to “bypass” but the function is the same.  Many residents blame the vibration of heavy trucks for damage to historic homes along the main routes through town. The Kent County Commissioners have regularly included a second Chester River bridge in their annual list of infrastructure priorities presented to the state for some 25 years.

The SHA, between 2007 and 2010, conducted a study for a second bridge over the Chester River at Chestertown. In the process, it looked at several options for the location, including a bridge entering Chestertown at the foot of High Street – an idea instantly rejected by residents as making the existing problems even worse. The route eventually identified as best ran east of town, running from the vicinity of Chester Harbor on the QA side to a route behind the property currently owned by KRM and being used for the new Dixon Valve warehouse. It would have connected to route 213 in the vicinity of Worton road.

That proposal met with strong opposition from Chester Harbor residents, who objected to a major road and bridge being built in close proximity to their quiet residential subdivision. Perhaps more important, from SHA’s point of view, was the multimillion-dollar cost of such a project, especially as it was in one of the less populous areas of the state. And while a second bridge across the Chester is high on Kent County’s priority list, Queen Anne’s is much more interested in the heavily-traveled Route 50 corridor between the Bay Bridge and Ocean City.

Recently, a Spy reader raised the question of the bridge’s condition in an email, writing, ” I understand that the Chester River Bridge was built in 1929 and was presumably sized for vehicles at that time. I was again startled driving across it on Friday to see a large semi-trailer loaded with pallets coming the other way.  God only knows how much it weighed.  I looked to see if there are any weight limits on the Chester River sign and there are none.  I do not know about you but I find that surprising because I frequently see less essential bridges with size limits.  Why is there no size limit on the Chester River Bridge? Why can’t the large trucks simply be routed up 544 to 301 and then down?”

The Spy checked and discovered that, in fact, according to the SHA website, there is no weight limit for the bridge – or, for that matter, on the other two state-maintained bridges in Kent County, one in Georgetown and the other in Crumpton.

Given the age of the bridge, it seems rather surprising that there is no weight limit. The question arises, has the bridge gone beyond its normal life expectancy?  The SHA’s 2010 study rated the bridge as “functionally obsolete,” though it also found that the bridge is “NOT structurally deficient.”

It has also been suggested that improvements on Route 301 now underway in Delaware may lead to much of the truck traffic now using Route 213 shifting to that route, which could potentially eliminate the need for the “boulevard.”

But that is only a possibility. There are still many questions about the current bridge and the need/prospects for a second bridge.  What does the state’s pronouncement of the bridge being “functionally obsolete” mean in practical terms?

The last study was completed in 2010; is a new study in order?

Hopefully, the various issues concerning the current “functionally obsolete” but “NOT structurally deficient” Chester River bridge will continue to be explored.  However, the towns and counties affected can argue and lobby all they want, but  the decision will ultimately be made at the state level. The state is not averse to spending money on local infrastructure — the roundabout at the top of High Street in Chestertown is a recent example. But realistically, the financial constraints and a lack of agreement on a location mean that a second Chestertown bridge with accompanying bypass, no matter how much they are needed, are unlikely to be in the cards in the foreseeable future.