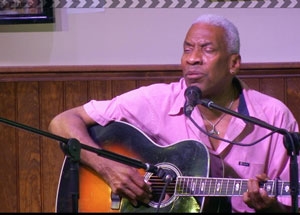 Something happened at the Charles Sumner Post #25 (G.A.R.) Monday night.

It was one of those moments you remember years later as a convergence of events that together become so much greater than the sum of its parts.

It was as if we stood, for a split second at a crossroads where hope and hopelessness collided and bloomed into a world of new possibilities.

In its simplest form, the evening was a performance by two gifted musicians, Guy Davis and Reggie Harris—who, as a gift to board members and friends of the G.A.R.— invited us into the heart of blues and gospel, taught us about the codes embedded in slave songs to communicate information about the Underground Railroad, and told personal stories about friends Pete Seegar and Odetta, all the while accompanying their narratives with songs, both original, and folk favorites.

But remember where we were—and the week we just endured.

We were in one of the two existing Grand Army of the Republic posts, meeting places for veterans of the Civil War Colored Troops, five days from bloody Charleston, South Carolina, and reeling from another year of cascading racial violence. And now we were transfixed by the heart-piercing folk-gospel and blues born out of centuries of African-American oppression.

And then it happened.

As Guy Davis tuned his guitar for the next song, an audience member stood to announce a headline that flashed over his cellphone: that Nikki Haley, the Governor of South Carolina, was calling for the removal of the Confederate flag from the grounds of the state Capitol.

If timing is everything, this moment was a rare intersection of the often flickering hope for racial equality, with a shock that maybe, just maybe, we were inching toward breaking down the walls of our prejudices.

A flag is a flag, dark, divisive and warped symbol that it might be, but it is the mindset behind the symbol that has to be reached for change to take place—and in the celebration of that moment, we wondered and hoped that this would be more than a televised moment of self-congratulations.

Davis and Harris gave us a voice Monday night to help articulate our sense of need to change the social landscape that kindles the kind of demented fury we witnessed in Charleston. It was the voice, in song, of history, oppression, hope, and challenge to take action.

Here are two songs in their entirety, one by Reggie Harris and one by Guy Davis, and the reaction to the announcement that South Carolina will remove the Confederate Flag from state property.